The white villa as seen from the direction of the sea.

The house in the Kaivopuisto district of Helsinki that now contains the Mannerheim Museum was built in 1874 and became known as the Boman Villa, after its first owner. It was the home of Baron Gustaf Mannerheim, Marshal of Finland, from 1924 until his death in 1951, although he never actually owned it, but rented it from the industrialist Karl Fazer. Prior to his tenancy it had been divided into six separate flats for workers in Fazer's chocolate factory, and Mannerheim had to have major alterations made before he could move in.

It is often said that a home can tell you a lot about its owner, and although, in spite of the numerous attempts, it will probably never be possible to lift the veil of mystery that surrounds Mannerheim's personality, it is evident that having lost his childhood home at an early stage and being committed to travelling a great deal, he attached great importance to his home. This is well reflected in the interiors, which he had designed himself right down to the colour schemes and the positioning of the furniture. 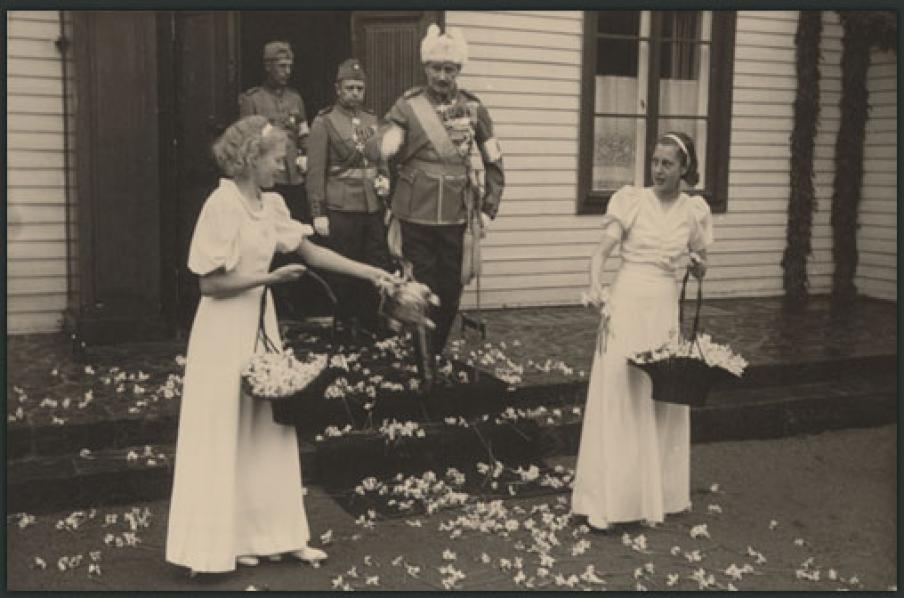 The Field-Marshal leaving home on his 70th birthday, 4th June 1937, in the company of Colonel A.E. Martola and Major S.K. Björkman. His neighbours Thaïs Horn and Margaretha Gustafsson are scattering daffodils before him. 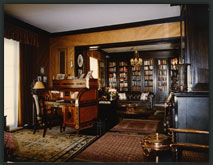 Instructions for the repair of the study, written by Mannerheim in his own hand in 1923 (the Fazer archives).

Following Mannerheim's death on 28th January 1951, the idea arose of opening his house to the public for a time, but when the doors were opened in November of the same year the numbers of visitors were so great that it was felt necessary to prolong the period. The Mannerheim Foundation had already decided in January 1951 to found a museum, but had not originally thought of placing it in his house, especially since the building and its grounds were in private ownership. Instead they had been engaged in a frenzied search for suitable premises to which his belongings could be transferred. Meanwhile the Foundation continued to rent the house from the Fazer family. The decisive turn in events took place in 1957, when the house and half of its grounds were acquired by the Foundation. A large proportion of the furnishings had been purchased from his heirs previously.

Since then the future of the museum has been assured and it has been able to function in an authentic environment that provides the only correct background for the exhibits. The portraits of his ancestors on the walls tell of his family history, and the gifts and honours bestowed on him by the government and people of Finland reflect his life's work for the good of his country: his military exploits, political influence and humanitarian work. The unique collection of medals and decorations on display in the museum bears witness to the esteem in which he was held not only in Finland but in other countries as well, while the numerous hunting trophies and souvenirs speak of an enthusiastic hunter and explorer, and the enormous library of a person with a broad interest in all aspects of life. The whole house still carries with it the peaceful, homely feeling created by a sophisticated cosmopolitan with an unwavering sense of good taste.

Portrait of Mannerheim as chairman of the Union Bank, painted by Akseli Gallen-Kallela in 1929.

The museum depicts Marshal Mannerheim's home as it was in the early 1940s, with the rooms furnished in the original way with the exception of three exhibition rooms on the first floor. The number of visitors has remained fairly constant over the years, at around 10.000 a year. Guided tours are available in six languages (Finnish, Swedish, English, Russian, French and German) providing a great deal of information on Mannerheim's life and the history of Finland in general. The museum is also engaged in compiling archives of material connected with Mannerheim and takes part in related research work.