The Marshal of Finland

The Mannerheim children in 1878: Sophie in the centre, with Johan, Carl and August on her left and Gustaf, Annicka and (below) Eva on her right.

Every human being is an enigma, and new generations are liable to discover new aspects of the personalities of historical figures in their attempts to understand their motives or follow their sometimes erratic lines of thought. Baron Gustaf Mannerheim, Marshal of Finland, is just such a figure, arousing interest among successive generations of scholars, as demonstrated by the innumerable books and papers written about him, more of which can be expected in the future.

Carl Gustaf Emil Mannerheim was born on 4th June 1867 at the manor house of Louhisaari at Askainen, near Turku, the son of Count Carl Robert Mannerheim and Héléne von Julin. His childhood home was nevertheless broken up by his father's unsuccessful business exploits and eventual move abroad and the death of his mother in 1881, upon which the seven children were placed in the families of relatives. Gustaf's guardian was his uncle, Albert von Julin. These unfortunate childhood experiences were reflected in his schooling, to the extent that, having entered the Cadet College at Hamina in 1882, he was dismissed in 1886 on the grounds of misconduct.

The coronation of Tsar Nikolai II in Moscow in 1896. The officers of the Chevalier Guards marching in front of the Tsar are Gustaf Mannerheim (on his right) and Wladimir Romanovitch von Knorring.

Mannerheim eventually received his military training at the Nikolaevski Cavalry School in St. Petersburg, and spent a total of 30 years in the service of Russia. A great deal happened in the course of this time, including service in various regiments of the Imperial Guards, marriage with Miss Anastasia Arapova in 1892, participation in the Russo-Japanese War of 1904—05, an extended reconnaissance journey across Asia on horseback in 1906—08 and the First World War. Mannerheim himself summed up his Russian period in the following words in his memoirs: "...and when I looked back on that time that I had spent in the uniform of the Tsar I had to admit with gratitude that my expectations had been totally fulfilled. I had entered higher circles and enjoyed broader perspectives than I could ever have done in Finland in those last decades of the 19th century. Each stage in my military career had been extremely rewarding, and to cap it all I had had the good fortune to belong to, and even to command, an elite force that had good officers and an excellent sprit de corps. The act of leading such troops, in peace and war, had given me the utmost satisfaction. I had seen much that was of interest on two continents." (Otava 1951. Part I, pp. 236-237) 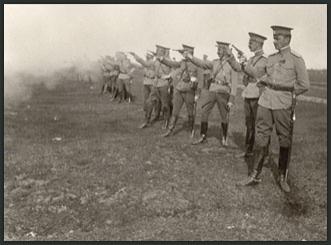 Colonel Mannerheim, commander of the Wladimir Uhlan Regiment of His Majesty's Life Guards, exercising with his officers. 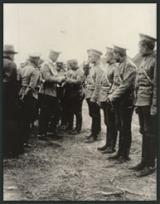 Mannerheim awarding crosses of St. George at the front in 1914, during the First World War

Lieutenant-General Mannerheim was transferred to the reserves in October 1917 and returned to Finland in December of the same year. He indicated to his relatives that he intended to spend the remaining years of his life in peace after his long and eventful military career, but that was not to be. He was still destined to serve as supreme commander of the Finnish Armed Forces in three wars, the War of Liberation of 1918, the Winter War of 1939—40 and the Continuation War of 1941—44, in addition to which he was chairman of the National Defence Committee from 1931 until the outbreak of the war and was Regent of Finland in 1919 and President in 1944—46. It was only in the 1920s that he was without any public office. A National Address compiled as an expression of thanks to him in 1919 left him with a considerable sum of money, the capital from which he could eventually dispose of at his own discretion.

As an honorary member of the Boy Scout movement, taking the salute at a scouts parade in Helsinki in 1938.

A large military exercise at Viipuri (Vyborg) in August 1939.

In the light of what he had seen of people's sufferings in the various wars and of conversations with his sister, Sophie Mannerheim, matron of the Surgical Hospital in Helsinki, he conceived the idea in 1920 of founding the General Mannerheim Child Welfare League, with the aim of improving the health of the nation's children over the social boundaries that had emerged more prominently than ever as a result of the War of Liberation. In 1921 he also became chairman of the Finnish Red Cross, a position which he held for the next 30 years. This activity that similarly spanned all social boundaries was very close to his heart and he devoted all his energy to it. On relinquishing the position of President, he spent his last years in quiet retirement, the summers in Finland and the winters in Switzerland. He died at Lausanne in Switzerland on 28th January 1951, at the age of 83 years and was buried with full honours in the military cemetery at Hietaniemi in Helsinki on 4th February.

The Commander-in-Chief of the Finnish Army and Marshal of Finland at Mikkeli in 1942 (Finnish Defence Forces).

Mannerheim is sworn in as President of Finland in Parliament on 4th August 1944.

Marshal Mannerheim undeniably had a major influence on the course of Finnish history, and he was at the same time a fascinating character - not only a soldier and highly exacting military commander but also a politician, and adventurous explorer, a warm-hearted supporter of humanitarian causes, a big-game hunter, a cosmopolitan who had seen the world and a generous host in his own home - And in addition he possessed one quality that is common to all great men, an immense will-power that carried him through all the difficult times. On his return to Finland Mannerheim chose a motto for himself, which apt sums up the ideal towards which he strove in everything that he did: Candida pro causa ense candido, "With pure arms on behalf of pure goals".